Midwest Sporting Goods is a firearms dealer and shooting range in Chicago, Illinois. Locally owned and operated, they are open seven days a week and offer firearm training classes, new and used gun sales, and a 13-position indoor gun range.

As an established business with customers coming and going each day, they were in need of a way to collect customer reviews and manage their online reputation.

Rather than passively hope customers would post online reviews after visiting Midwest Sporting Goods we developed a reputation strategy with a proactive approach for collecting reviews.

The reputation strategy was based on two primary goals:

Although Midwest Sporting Goods had 174 reviews before starting their campaign, they had an average overall 3.5 star rating which likely lost the click-through to their two top competitors with 4.3 and 4.8 overall star ratings. Studies show that even 1/2 a star rating affects profitability so this was a high priority to improve.

In order to meet these goals, we helped implement RevenueJump, a tool that automates and simplifies the process of asking customers for reviews. After making a purchase or visiting the gun range a simple text message is sent to the customer asking if their experience was good or bad. If good, the customer is asked to write a review and if bad, the customer is asked for feedback which is sent privately to the Midwest Sporting Goods team to handle. 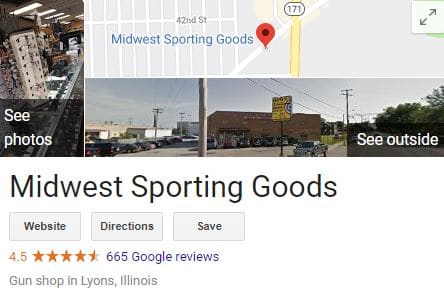 Within the first two months of using RevenueJump, Midwest Sporting Goods had gained over 20 new published reviews on Google, 15 new reviews on Facebook, and 4 on Yelp.

Now that they have run this Review Growth Campaign for over two years we have seen dramatic improvements in their online reviews. In the past two years, Midwest Sporting Good’s overall Google rating has moved from 3.5 to 4.5 which is significant! This also means that there are a significant number of positive reviews to outweigh negative reviews.

As Midwest Sporting Goods has learned, reviews are a numbers game over time. Google is looking for a consistent flow of reviews being posted. A company that has a lot of reviews to start with before using RevenueJump could take longer to see a rise in rating, due to the large number of previous reviews it has to compensate for.

The commitment and hard work in providing a positive customer experience and following up with customers has paid off for Midwest Sporting Goods in a big way.

“Besides getting more reviews that will improve your Google rank the best thing about RevenueJump for our company is that when we get negative feedback we can bring it to our sales teams’ attention and make improvements to the customer experience. When your sales team knows that you are asking for reviews they know you are serious about how your customers and guests are treated.”

Don‘t Stop Here! See What Else We’ve Been Up To

Start Achieving Your Own Great Results

Everyone measures success a little differently. Whatever it is you looking for we can help develop a winning strategy to get you there just like we did for Midwest Sporting Goods. We look forward to getting you the results you deserve!

Get Your Free Search Marketing Proposal
By continuing to use this website, you agree to the use of cookies.AcceptRejectPrivacy Policy
Scroll to top